I was expecting the air to be on the chillier side when I stepped out the door Monday morning. I was surprised that it was already on the warmer side. I guess that cold spell we’ve had this last week is over. I looked at the clock radio in my pickup, it said 12:20 a.m. I pulled out of my driveway and headed to Pullman.

By 1:30, I was firing up my semi and getting ready for the long day ahead of me. I had to do my part and help out with the accident from Thursday. Everything was cleaned up and the can itself was recovered, but now we needed to get it unloaded and then out of our hair.

If you don’t know exactly what happened last week, long story short is I had an accident with my truck. I took a corner too sharp and accidentally rolled the trailer over onto its side. It was a pretty big ordeal. Police and DOT came out, not to mention a super-sized wrecker. Read my last post for more information.

So I left this morning with the damaged can, and headed to Seattle. My first stop was going to be at Mac Piper, which is a facility that deals with shipping and receiving as well as load reshuffling. The plan was to get over there by 8 a.m and have them completely unload the container. Then I needed to head over to terminal 18 and return the damaged empty container. After that I was to head over to terminal 46 and grab a new empty container and bring it back to Pullman.

I ended up getting into Seattle around 6:30. Since I had time to kill, I went ahead and parked my truck at the Pacific Pride located behind terminal 18. I figured it would be a good location to take a break and eat some breakfast. By 7:30 I headed over to Mac Piper. After checking in I was told to meet one of their workers in the enclosed shipping yard.

I’m not a fan of tight spaces, especially while in a semi truck. This place was super tight. I mean if you tried to stick out your arms, you’d be in danger of hitting your elbows on a trailer. My nerves were through the roof. I ended up finding a little out-of-the-way spot where I could park and wait for further instructions.

Finally around 9 a.m, the dock supervisor came out and found me. He told me to back up and then make a u-turn and then just back straight up to the dock. They would take care of the rest. Somehow I managed to maneuver through all the containers and errant traffic in this tiny little facility and make it into the dock.

It took another 30 minutes while the workers tried to figure out how exactly they were going to approach my container. But they figured it out in the end and soon my trailer was rocking back and forth as they started pulling everything out. While they did that, I was busy cleaning and scrubbing the inside of my truck. I was trying to stay productive even though I was already dead tired. There’s still more work to do, but I am pretty happy with how things look so far. Around 11 a.m. one of the workers came out to my truck and informed that they were done. That was music to my ears. I pulled forward and quickly left the facility.

I made it over terminal 18 by 11:30. I hopped onto the scale, and pressed the intercom button. There was no voice on the other end telling me what to do, however on the LCD screen I was assigned a drop location. I thought this was awesome. I was thinking to myself oh wonderful! David must have already contacted them and apprised them of the situation. This is going to be an easy situation I thought.

I sat for about 30 minutes at the location they first gave me. And when the top pick showed up to grab my can, he refused it and told me to go to the trouble office. The trouble office is a building at the very front of the terminal. It’s where you go when you have problems. I got in line behind a few other drivers and waited patiently for my turn to get some help. It was going to be a long time before I was able to get anyone to help me. I ended up standing in line for an hour and a half. My legs were getting tired, and the line wasn’t moving. It was getting to the point where I just wanted to go home. I kept saying the Jesus prayer over and over again. Not just for myself, but also for my fellow drivers waiting in line with me and the office workers who were trying to resolve all of our issues. I figured we were all in this boat together.

Finally! I got somebody to help me. Turns out the first problem was they thought my container was still loaded. After sending somebody down from the office to physically look at my can, they were able to confirm yes it was empty. I pointed out how the roof was bowed outwards, that way they couldn’t say they didn’t know it had damage. Then it was time once again to get back in line and wait patiently in order to find out what to do next. At 2:30 I was finally giving a new drop off location and started seeing a little bit of light at the end of the tunnel.

I was instructed to head over to Row Q, space 132. Off I went. The line for row Q was so long that it wrapped around Row R, and ended at Row S. Slowly we crawled our way forward like inchworms. Finally after what felt like an entire Lord of the Rings Marathon (extended editions), I was After the proper drop off location.

It was at this moment that one of the little white port security pickup trucks came driving by and noticed the large bulge on the top of my can. He stopped and got out to talk to me. “I’m going to need to have you head back to the trouble office, that can has a pretty big bulge in it.” I told him that I had just come from the trouble office and was instructed to go to this location. He looked at me with skepticism in his eyes and grabbed his radio while he walked away. I knew he was calling it in. Pretty soon he hopped back into his pickup truck and drove away. He returned five minutes later. He told me to pull forward and that they would get the can off of me in the next few minutes. I gave him a thumbs up, and said a silent prayer of thanks. I was really nervous. I already been at this facility for almost four hours and was afraid they weren’t going to take the can. As soon as they lifted that can off of my chassis I pulled away with giddy excitement. I had completed two out of my three tasks for the day.

I made it over to terminal 46 and to my relief, I found it basically empty. There were no lines anywhere and I was ecstatic. In no time at all I was inside the port and a new empty container was being lowered onto my chassis. A few minutes later I was headed toward the exit. And then, I was finally on the road heading home. By this time it was 4 p.m.

I know for a lot of people Mondays are difficult. And that was no exception with me. This day was hard, there’s no better way of saying it. Lots of nerves at Mac Piper, and then lots of apprehension and frustration at Terminal 18. Of course none of this would have happened if I hadn’t rolled the trailer on Thursday. But I did, and I have to accept that. I cost the company several thousands of dollars and threw a major wrench into the upcoming load plans. It seemed only fair to me that I get the task of dealing with the can and everything that goes along with it.

It actually got me thinking about how we move on from the mistakes we’ve made. How we redeem ourselves, especially after we’ve royally screwed up. Apologizing is a great way to start, but it doesn’t mean anything if it isn’t followed up with action. (Actions speak louder than words!) When you break someone’s trust, it takes time in order to rebuild that trust. Sometimes you have to sacrifice a little bit and work really hard in order to rebuild what was lost.

The church fathers actually talk about how one must have a humble heart and through prayer and fasting (and belief in Jesus Christ) salvation is attainable. It’s not a free ride however. Christian Life takes hard work, sacrifice, and a little bit of personal martyrdom. Not to mention a willingness to take the frustrations of life and instead of dwelling upon them in anger, offer them up to the Lord. The life we live as Christians isn’t easy and we are called to do things that society might consider outdated. It can be hard to emulate Christ. Not only must pray for ourselves but it is paramount that we pray for everyone around us, even our enemies. We must hold ourselves to a higher standard and not allow ourselves to succumb to the anger, drama, and frustrations of the day. Instead respond with patience and love.

That was the mindset I was trying to focus on. Even though I was having a long, frustrating day (it wasn’t necessarily an easy one either) I was working towards rebuilding my relationship with my company. I was helping with the recovery process. If doing my part meant sacrificing my day by going down the hard road and working through all the problems and inconveniences, then so be it.

By the time I got home and crawled into bed, it was past 10 pm. I left the house when it was still dark and I got back after dark. I’m thankful that I was able to make it back safely. I feel like my guardian angel was definitely working over time.

Repairing a negative situation isn’t easy, but with God’s help everything is possible. It just takes humility, a little self-sacrifice, and some hard work.

Thanks for reading and for all the support you’ve all shown me recently.

Wednesday morning I leave for Pennsylvania to attend the Ancient Faith writing and podcasters conference. I am so excited, and I’m looking forward to learning new things and maybe some new ideas to implement with this blog. I’ll keep you all updated!

Until next time my friends 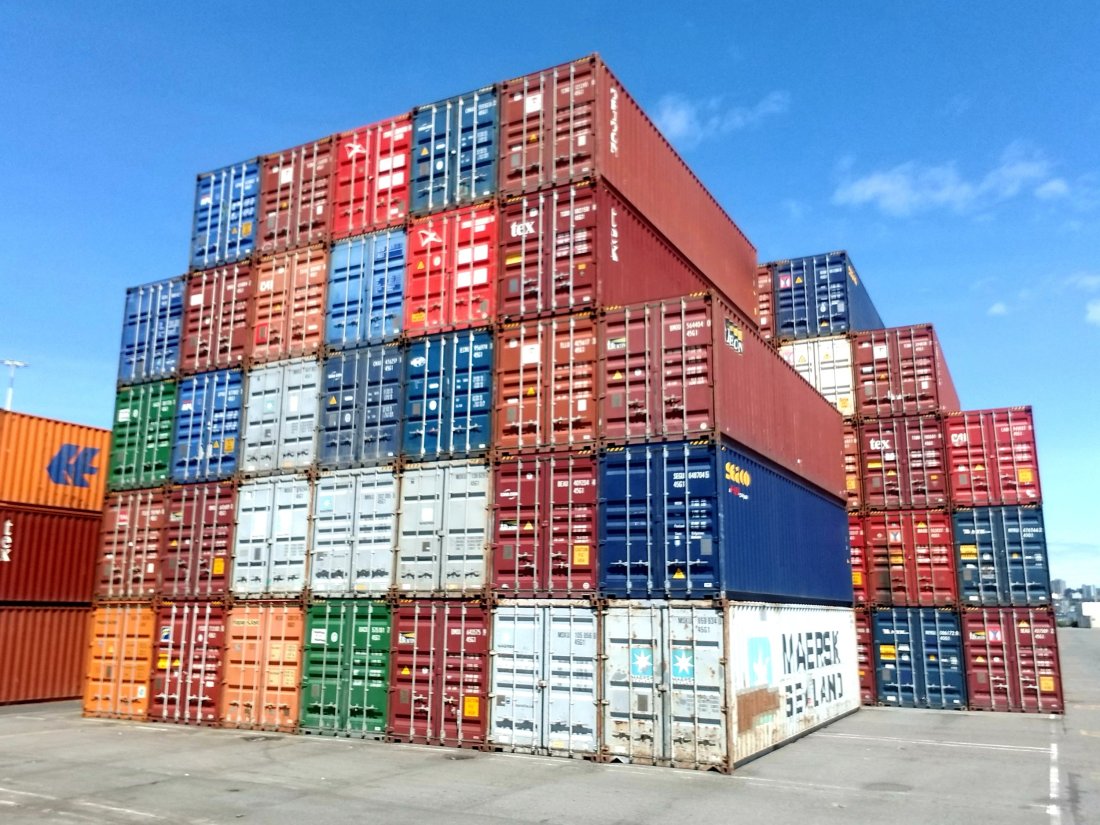 A stack of shipping containers at Terminal 18