I thought those were going to be the first words out of David’s mouth. If I were him, I would have fired myself on the spot. Instead, he hugged me and asked if I was okay.

I woke up Thursday morning in a really great mood. I slept a full nights sleep, had a great breakfast, and was ready to get to work and start hauling grain. Then I got the call.

“Hey Ian, truck 24 isn’t answering his phone and we need to get that load to Seattle asap!” I said no problem, I’ll take care of it. It was only 8:30 in the morning. I could still make it.

I unhooked his truck from the chassis, parked it to the side, and hooked my truck up in its place. After doing my pre-trip inspection and making sure everything was ready, I took off for Seattle.

I didn’t get very far. I started my turn from the parking lot onto the road, and the next thing I knew, my trailer was sliding into the ditch. I first felt my momentum stop, as if gargantuan metal deep sea anchors were suddenly hanging from my bumper. Then I watched in my mirror as the can listed to the right. At the same time I heard the creaking of the metal as the weight of the can (50,000 lbs) helped force the chassis onto it’s side. I watched with horror on my face as the entire trailer titled and slid into the ditch with a thunderous crash. At the same time, my truck was suddenly lifted from the back into the air by about 5 feet as the attached chassis pushed my truck upwards. The nose of my truck came crashing down hard into the road. Grinding and popping noises could be heard coming from the engine. Inside the cab I panicked while everything around me was coming undone.

I jumped out of the truck an looked at the carnage laying behind me in the ditch.

I couldn’t believe what was happening. I was in shock. I didn’t even know what to do next. I told myself it was time to wake up, I needed this bad dream to be over. Truck accidents are a frequent nightmare of mine, and here I was living it. I slapped my cheek, it hurt.

This wasn’t a dream.

I called my boss. “David, get down here right now. I just f’d up. The trailer is on its side in the ditch!”

I hung up the phone, and for some reason I started walking back the shipping office. The office receptionist opened the door and said “What are you doing, go get your triangles out on the road!” I tried to apologize to her, as Columbia grain owned the chassis I was pulling. “I don’t want to hear it right now!”

I ran and grabbed my orange reflective safety triangles and placed them on the road.

Soon local police, state patrol and the department of transportation were all on the scene. Flaggers were directing traffic around the accident. A heavy tow wrecker arrived. They attached three different cables from the wrecker to different parts of the chassis frame. However with the heavy can still attached, the wrecker was being drug backwards towards the bent chassis!

David grabbed a nearby acetylene torch and climbed up on top of the can. He fired up the torch and started cutting through the metal locking pins that were holding the can to the frame of the chassis.

CLANG! The locking pins snapped allowing the can to break free from the chassis. My boss held on so he wouldn’t be knocked off. Soon the tow truck was reattached to the chassis and with a few minutes the chassis was drugged out of the ditch and back onto the gravel road.

While this was all happening, I stood pretty much motionless watching as everyone worked to fix the situation. I didn’t know what to do, or what to say. I felt as if I was just in the way. I was in no emotional state to be of any assistance to anyone. The whole process to clear the road, recover the equipment and file the accident paperwork took about four hours, and I only realized how much time had really passed after I was in the car with my wife heading home around 4pm.

I was certain I was about to be fired. I’ve worked for quite a few different companies and I have been asked to resign because of lesser offenses. The thought of losing my job and having to start all over again was terrifying. Not only that but an accident that was as major has this would certainly be a career-ender. I was absolutely certain I would never drive truck again. I panicked. I thought an accident this big would mean no company would ever consider hiring me. I started worrying about how I was going to support my wife and son and then I saw the house that we have been living in for almost 2 years, the house that we’ve been trying to buy slowly fade into oblivion as we became homeless again. I thought well maybe I can try going back to college, is it too late to apply for fall semester? I looked up the WSU website. Yes, it was too late. My mind was racing at a thousand miles an hour trying to keep ahead of the disaster that was surely about to fall upon me.

The State Patrol officer was talking to me. I blinked and snapped out of my mental solitude. He was asking for my license and asking if I was okay. I handed him my CDL and said yes I am okay. He asked me to take him through my morning. So I explained step-by-step what happened. He asked for my driver logs, and I handed them over.

Suddenly I heard words being shouted into the air. “Daddy!!” My wife and son had just showed up to provide me with some much needed emotional support. I needed it, and was so thankful for their company. The officer handed my son a pair of handcuffs to play with and a junior trooper sticker. He was so excited. I continued helping the officer complete the post accident inspection. We soon discovered a wiring harness inside the engine compartment had been severed by the radiator fan blades. It was the main wiring harness for my ABS system. He then looked over the twisted frame of the chassis. A flat tire and some ruptured hose lines went down on his report. He handed David the inspection paperwork.

David looked at me and said the words I was dreading.

Well, you’re fired! But he said it with a hearty smile. Then he said “Don’t worry about this. Accidents happen, and this type of accident was bound to happen here. I mean the pathway out onto the road is too narrow. It was bound to happen eventually. Go home, take it easy. Tomorrow you’ll take my truck and run garbs again. Let’s get you back on the horse.”

I hugged him so hard. I wasn’t fired. He understood that these things happen and as long as no one was hurt, everything would be okay. My wife even thanked him for his kindness and compassion.

Earlier I had truly felt that it was the worst day of my life, but as the day kept going I was reminded again and again of how God works in all of us. No body blamed me or made me feel down about the situation. Everyone was kind and reassuring. Even the driver of truck 24 showed up and helped cheer me up.

It was truly an amazing set of circumstances. I mean if I was going to have a horrible accident, that was the place to do it. The shipping company already had the necessary tools on hand. The normally busy road was completely devoid of all traffic when I slid into the ditch. And even the underground gas line that my container landed upon remained undisturbed.

I was quickly realizing that it was not the end of the world. God had sheltered me and protected me all throughout the day. Through his mercy I came to understand that life would go on and I would live to drive another day.

And drive again I did. As David said, it was time to get back up on the horse. The very next day I hauled garbs from a farm up north, back down to the Columbia grain facility. There was no avoiding anyone, just get back to work and learn from the past. It was good day, and it felt great to regain my confidence behind the wheel once more.

Thank you so much for reading about my experience. It is truly amazing how God takes a horrible situation and turns it into something that makes us want to honor him. May The Lord continue to watch over all of us and protect us on our daily journeys.

Until next time my friends… 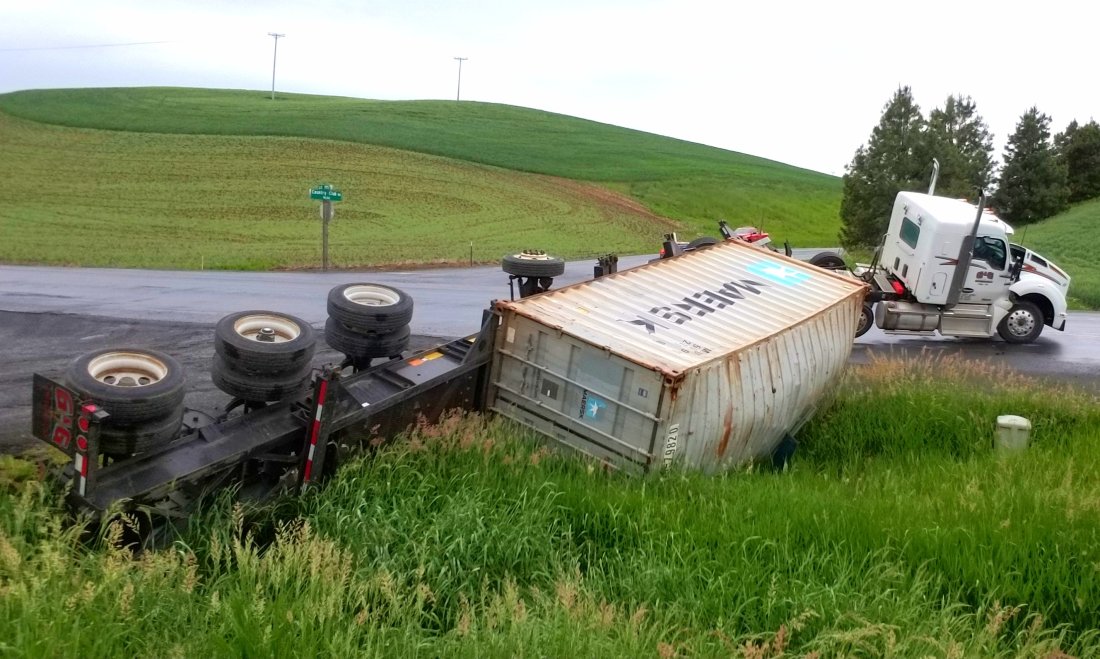